The Printer is Printing Hieroglyphics!

Did you try to print a document to a networked printer, only to get pages of hieroglyphics? And each page only has one or two lines of indecipherable characters, somewhat (but not exactly) like what you see below? This support article should give you some guidance in resolving the issue.


First of all, before doing anything else, you need to cancel any print jobs. Do not unplug the printer. Do not empty the paper tray. These two actions don't solve the issue, they just kick the problem down the road and make it worse. The next person to turn on the printer or reload the paper tray will be in the same scenario you're in, but even worse. Instead, cancel the job right there at the printer. To do this on Kyocera printers (which are most susceptible to this problem), hit the red 'cancel button'. The printer's screen will ask you to confirm you want to cancel the job; you'll agree by hitting the circular "OK" button. Repeat as many times as necessary until the screen reads "Ready", as shown below: 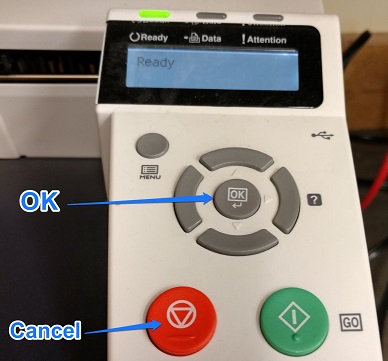 OK, you've stopped this paper-wasting machine in its tracks, nice job! Now what? We need to treat the underlying cause of the problem. The 'Printer Possessed by some Angry Egyptian God' issue is usually the result of a corrupted printer driver on your computer. Don't worry if you don't know what that means, here's how you fix it:

2. You'll see a window that displays all the devices and printers connected to your computer. Scroll down until you find the misbehaving printer. If you aren't sure of the printer's name, all TSS printers have a label that tells you what they're called, such as "JC-WC-Copy-Room". Make a note (seriously, write this down) of the printer's name.

3. You need to remove this printer from your system. Do this by right-clicking on the printer's icon, then choosing "Remove Device". Note that you'll have to be an administrator of your computer to make this fix. If your computer doesn't allow you to remove the printer, contact helpdesk@tetonscience.org for assistance.

4. OK, now you'll need to restore the printer to your system. You can do this by clicking on the "add a printer" option in the "Devices and Printers" window: 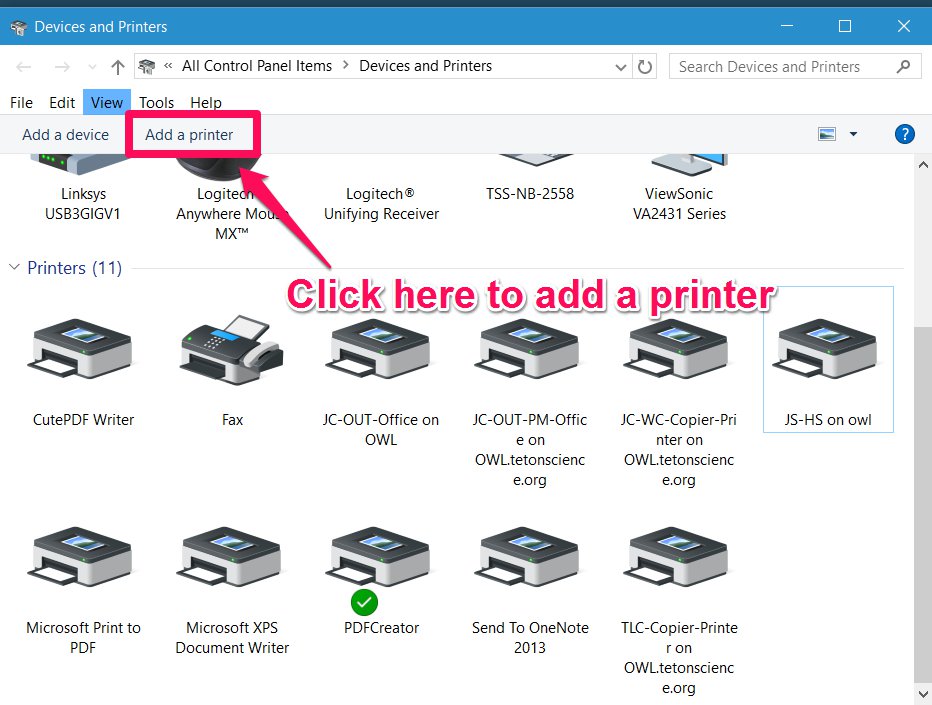 5. If you're offered a choice between a Networked Printer and a Local Printer, choose the Networked Printer option. Then, scroll down the list until you find the listing for the printer you removed; select it and choose "Next".

6. That's it! Windows will add your printer and install the necessary drivers. Go ahead and print a test page to see if it prints normally. If it does, great; you're finished! If not, contact helpdesk@tetonscience.org for additional support.