The Windows Key: The Most Useful Key on Your Keyboard (that you're not using) Print

On most keyboards that come with Windows laptops, there's a key near the bottom left-hand corner that's labeled with a Windows logo. It's usually interspersed with the Ctrl, Alt, or Function keys. If you're like many people, you might have wondered: "What's the point of this button? I never use it!" Well, dear user, wonder no more...prepare to meet the most useful button on your keyboard. Follow along with the tricks below and try them out as we go. Throughout this article, you'll see "Do Nows" in orange type, which are quick exercises to practice some of the different ways you can use the Windows key. All of my examples will be using Windows 10, but most of the tips below will work with Windows 7 or 8. 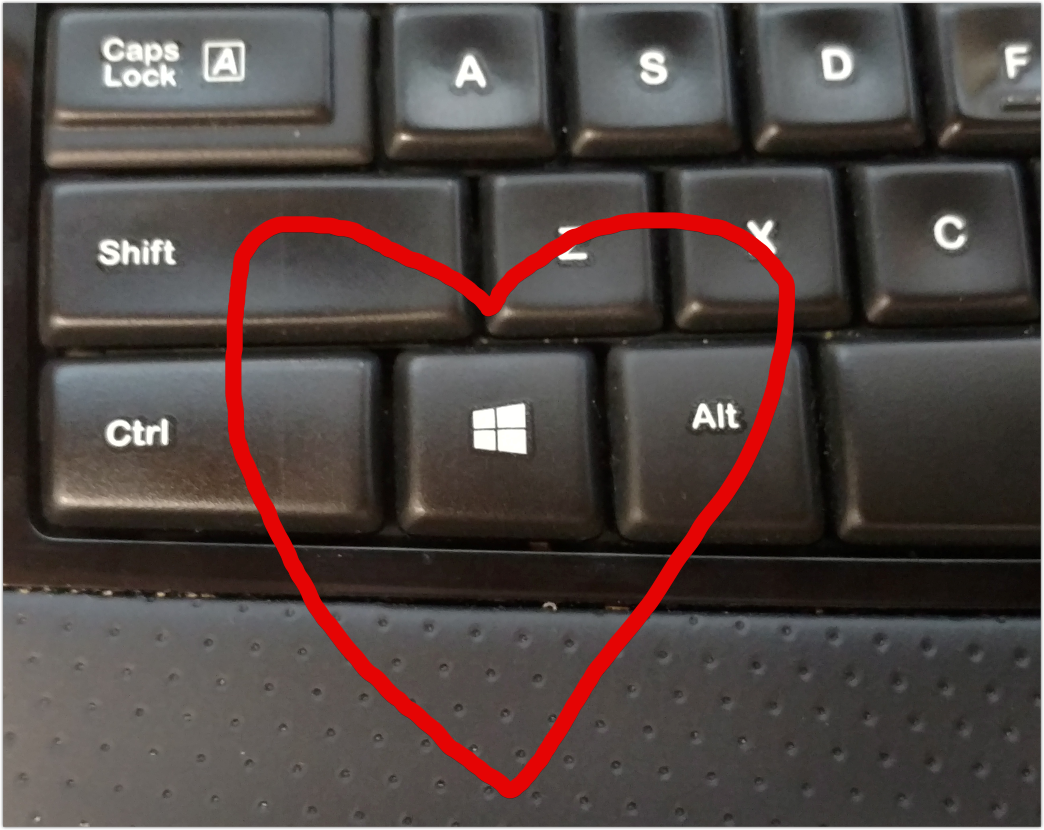 Let's start with the basics. Hitting the Windows key on its own will launch the Start menu which, you already know, gives you access to a menu of applications and settings on your computer. In Windows 10, the start menu is customizable, so you can pin your favorite applications for easy access. 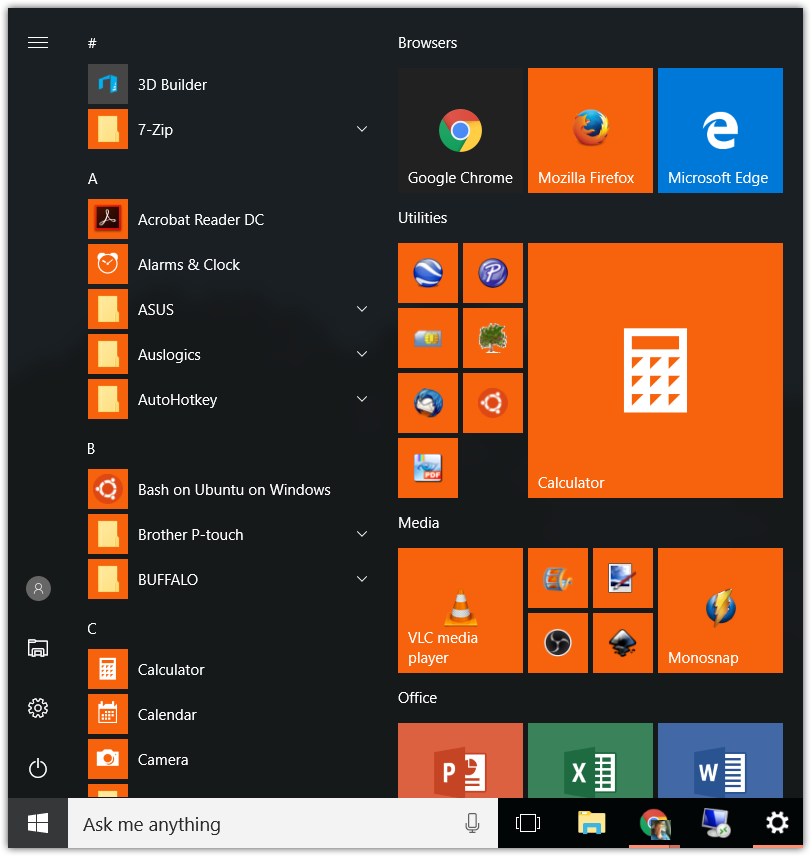 In Windows 10, you also get a few icons on the far-left side of the start menu. Do Now: Launch the start menu and click on each of the four icons (if you're a Windows 10 user) and see what each one does. 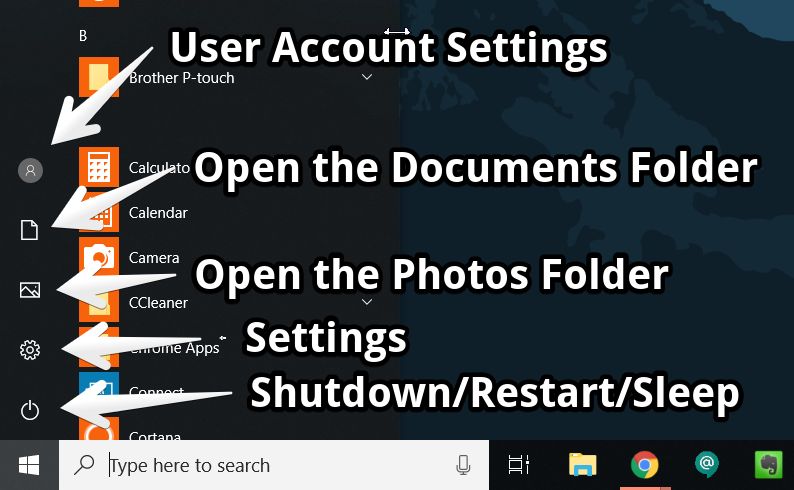 Last, but not least, we have the Start Menu's most powerful feature: SEARCH. After pressing the Windows key and launching the Start Menu, anything you type will trigger a search your computer's files, applications, and settings. I probably use this feature 20 times a day, no lie. It's one of the fastest ways to find and launch an application or find hidden settings and, best of all, you don't need to take your hands off your keyboard.

DO NOW: Press the Windows key, then try some of the searches below, followed by the Enter key

As useful as the regular Start menu is, Windows 10 also has a SECRET Start Menu (its boring name is the 'Quick Link Menu') . You can access it using, of course, the Windows key. If you press the Windows key and the letter X (Win + X) at the same time, the Secret Menu is revealed!

The Secret Start Menu has a bunch of quick shortcuts to some of the most useful system tools in Windows. Even better, you can invoke any of these commands with a single keystroke. Take a look at the menu above. See how each command has one letter underlined? 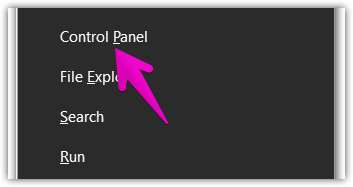 If you hit Win + X, then the underlined letter, you'll launch the corresponding application. It's one of the fastest ways to access commonly-used system apps. Let's try it. Do Now: try using the keyboard combinations below to launch different system apps:

See all of your open applications with Windows + Tab

In Windows 10, there's a new feature called Task View. It allows you to see all of your open applications, shrunken down into thumbnail images. Macs have had this feature for a while (called Expose), but it's a recent addition to Windows. Do Now: press Windows + Tab to view all of your open applications. You can hit the Escape key to leave Task Viewer 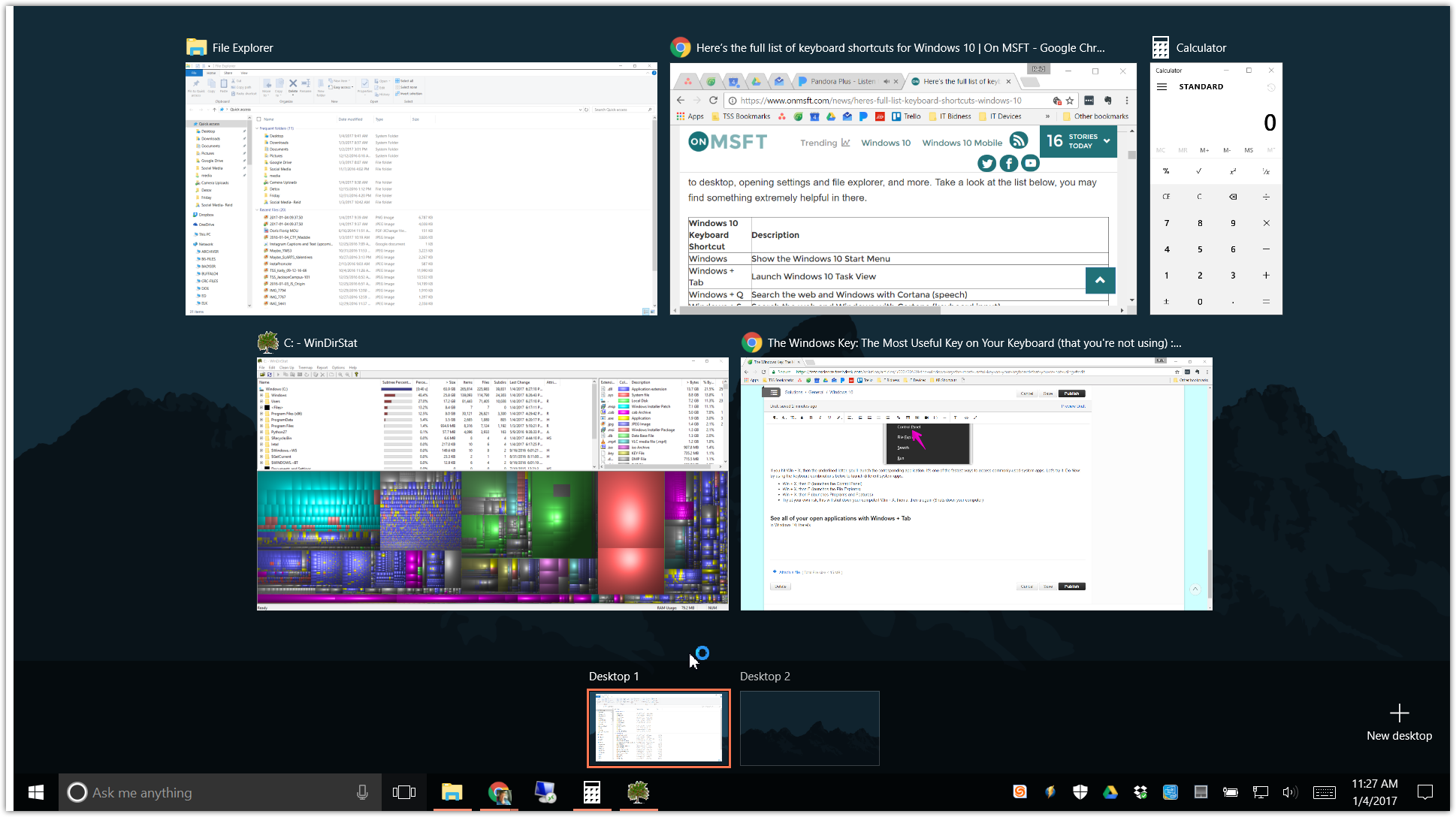 Connect to a Second Screen or Projector with Windows + P

If you need to configure your laptop or connect to a second screen, hitting Windows + P is the quickest way to do this. Do Now: Press Windows + P to reveal the projector menu.

Secure Your Computer with Windows + L

Are you standing up from your desk to head out to lunch or to help a student in your class? It's good practice to lock your computer when you're not using it. If you're using a mouse, this requires at least three clicks but you can also lock your screen instantly by hitting Windows + L. Anyone wanting to use your computer will then need to enter your password, or log in with their own credentials. Do Now: Press Windows + L to lock your screen. You'll need to re-enter your Windows password to resume your work.

It's often really useful to divide your screen between two different applications. For me, I'm often looking at an email receipt in one window while I'm looking at a credit card statement in the other. Of course, if I'm a master window resizer with the hands of a surgeon, I could drag the border of each window to the exact size I want, but ain't nobody got time for that. Using Windows + Right Arrow, my credit card statement gets locked to the right side of the screen, and then Windows allows me to choose what application I'd like to see alongside it. Hat Tip to Colby Mitchell for showing me this trick. 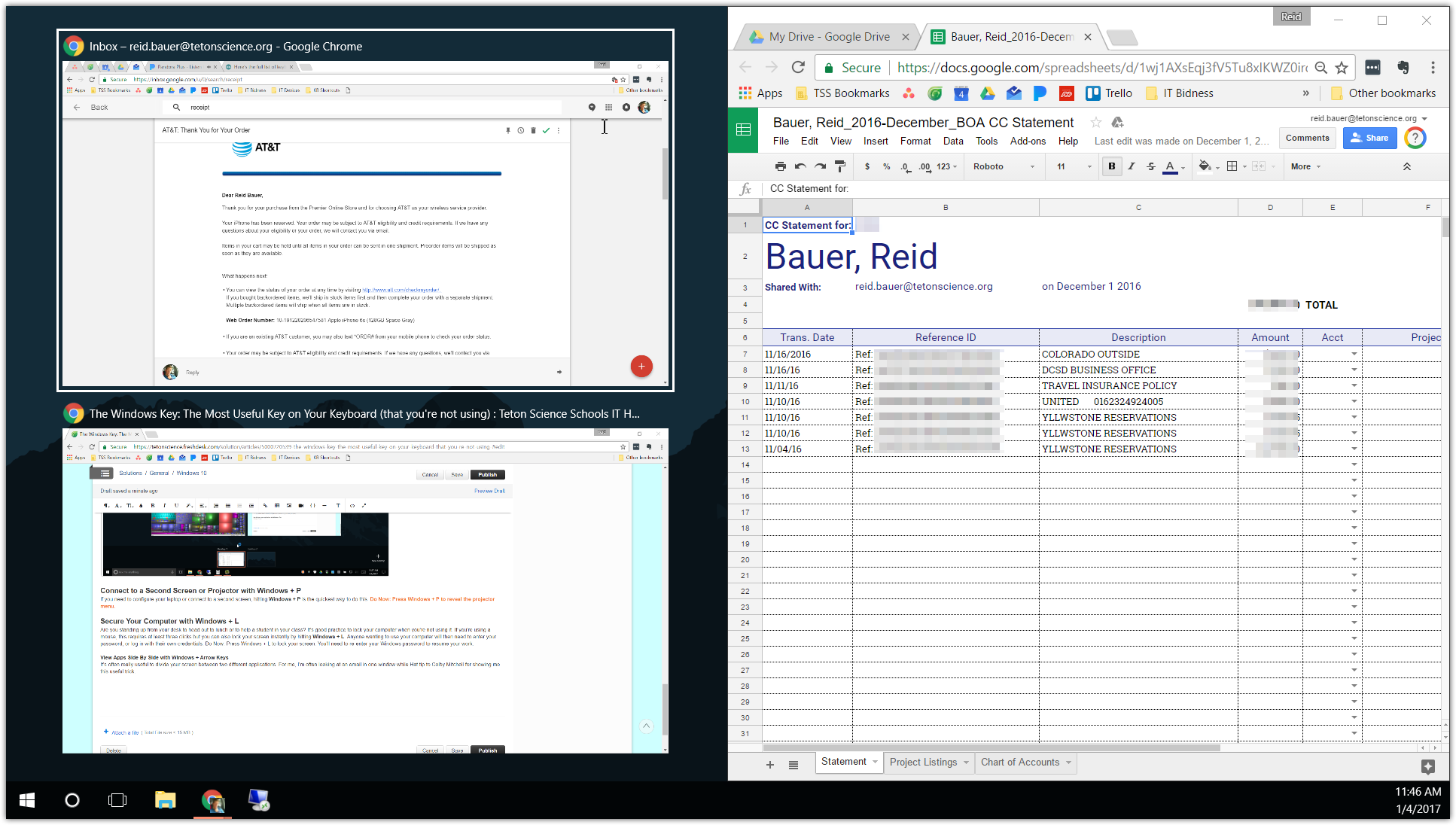 Do Now: Press Windows + Left Arrow and experiment with putting two applications next to each other.

Change Windows Settings with Windows + i 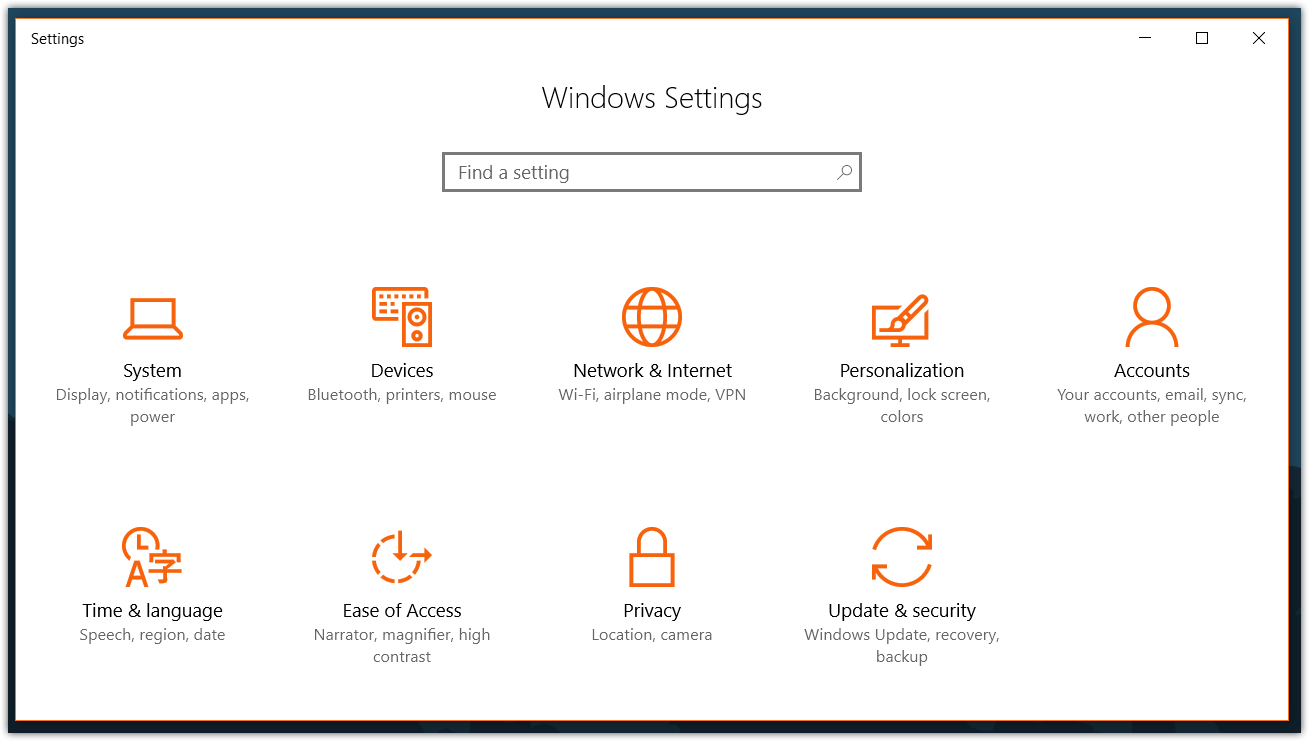 Reveal Your Desktop with Windows + D

There are quite a few other ways you can use the Windows key. If you're interested in learning more, check out this full list from Microsoft: https://support.microsoft.com/en-us/help/12445/windows-keyboard-shortcuts