"I know you shared it with me, but where, exactly, is it?"

This question comes up a lot, especially for new users of Google Drive. You get an email or a notification saying someone has shared a document with you. You can click on the link in the email and view the file, but there's lingering sense of unease. You can view and edit the file, but you don't really understand where it is.

To use an analogy, in the old Network Files days when you wanted to share a file, it was like giving driving directions to a house: "First you go into Network Files, then Field Education, then open Master Logistics, then Planning and Implementation, then..." (Fun fact: this exact statement was the start of at least half of my conversations when I was on the Field Ed faculty.) Anyway, you can see how this is a lot like giving driving directions: "Head into Jackson, then turn left on Route 22, then turn right on Moose Wilson Road..." The 'route' might have a whole boat-load of steps, but since you drove the whole route to the house, you know you could follow the same route again and find the same house.

With Google Drive, when someone shares a file with you, you don't get that same sense of geography. Instead of getting directions, it feels more like you jumped out of a plane and parachuted straight to the house's front yard. Sure you're at the right home, but as you shrug off your parachute and climb the front steps, you're not sure you'd be able to drive your way back to the same spot.

This article is meant to provide some pro-tips and strategies for navigating around inside Google Drive so that it feels more like biking around the streets of a familiar neighborhood and less like skydiving into hostile terrain.

So, Let's Say You Get an Email Like This:

...and you want to know where this 'Toast Recipe' document is.

Option #1: Inside the Document (Works with Google Docs)

So, let's say I've opened up Mani's Toast Recipe document. If you look next to the document's title, you'll see a small folder icon (if you don't, that's OK, we'll address that issue below). Clicking on it will tell you where the document is located. In this example, I can see that the Toast Recipe is located in "IT_Public". 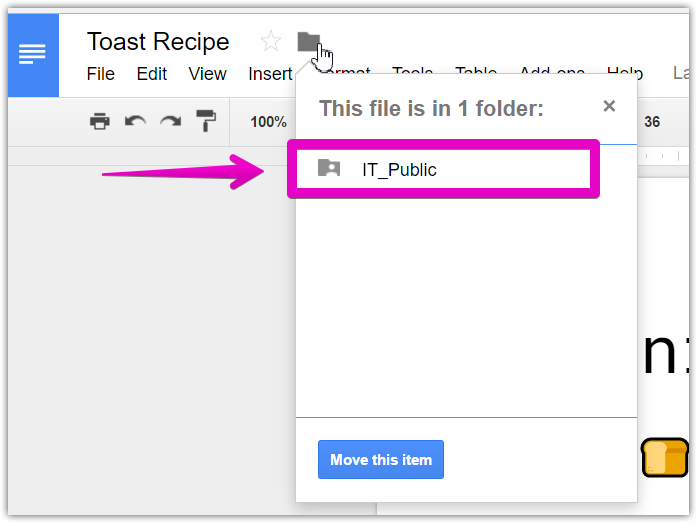 If I then click on "IT_Public", a new Google Drive tab will open and show me the IT_Public folder, where the Toast Recipe is located, and a path for how I can get there within the TSS Files hierarchy: 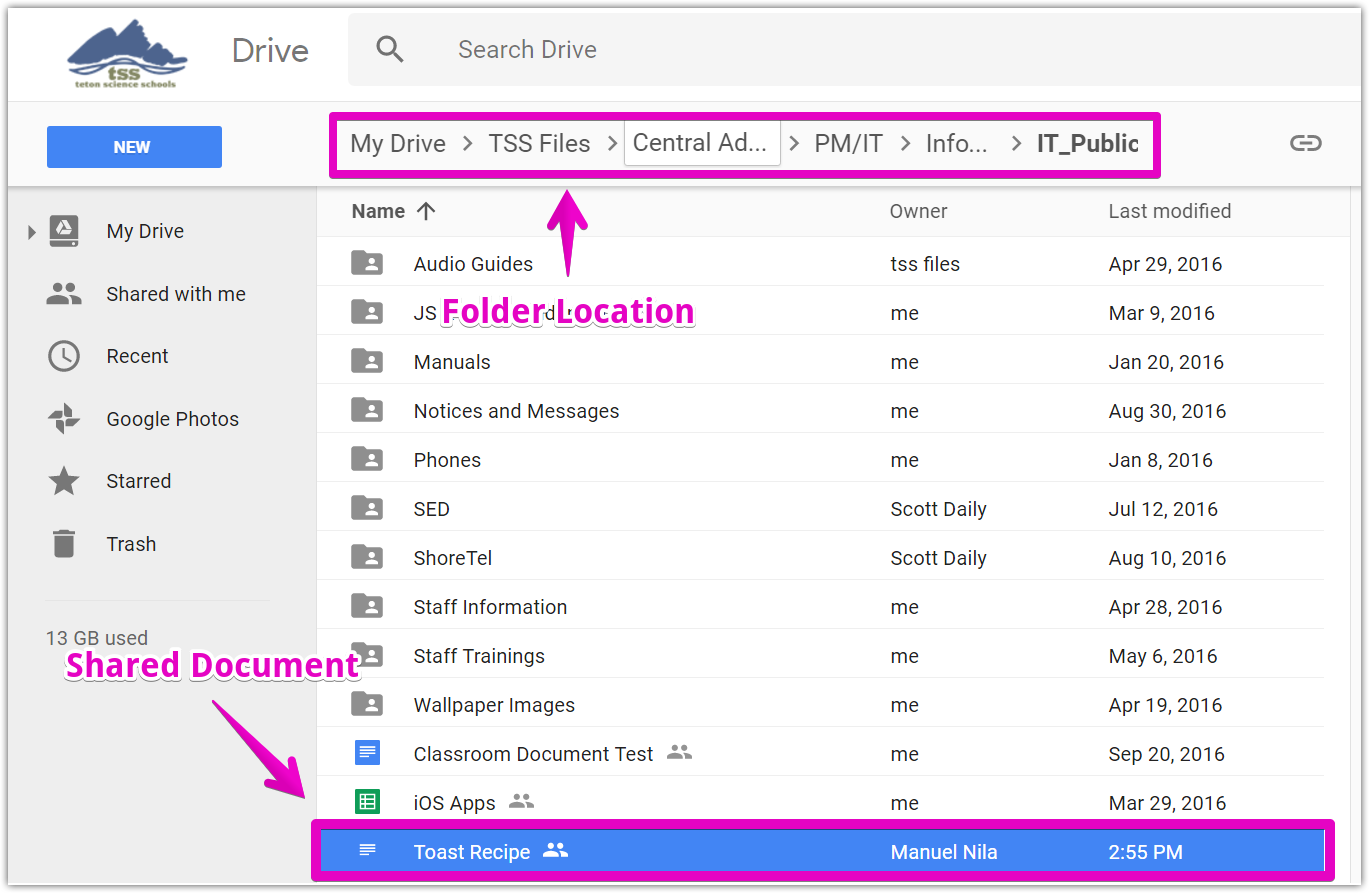 This window shows me the contents of IT_Public and it also tells me that I can find it in TSS Files -> Central Administration -> PM/IT -> Information Technology -> IT_Public, the driving directions I was looking for.

Option #2: From Google Drive (Works with Any File)

You probably already know that you can go to drive.google.com and click on "Shared with me" to see every document that anyone has ever shared with you. If the document you're looking for is recent, it will show up near the top, as shown here. If it's not a recent document, you can search for it.

Once you've got your mystery document selected, you can find the document's 'driving directions' in two places. One is at the bottom of the screen: 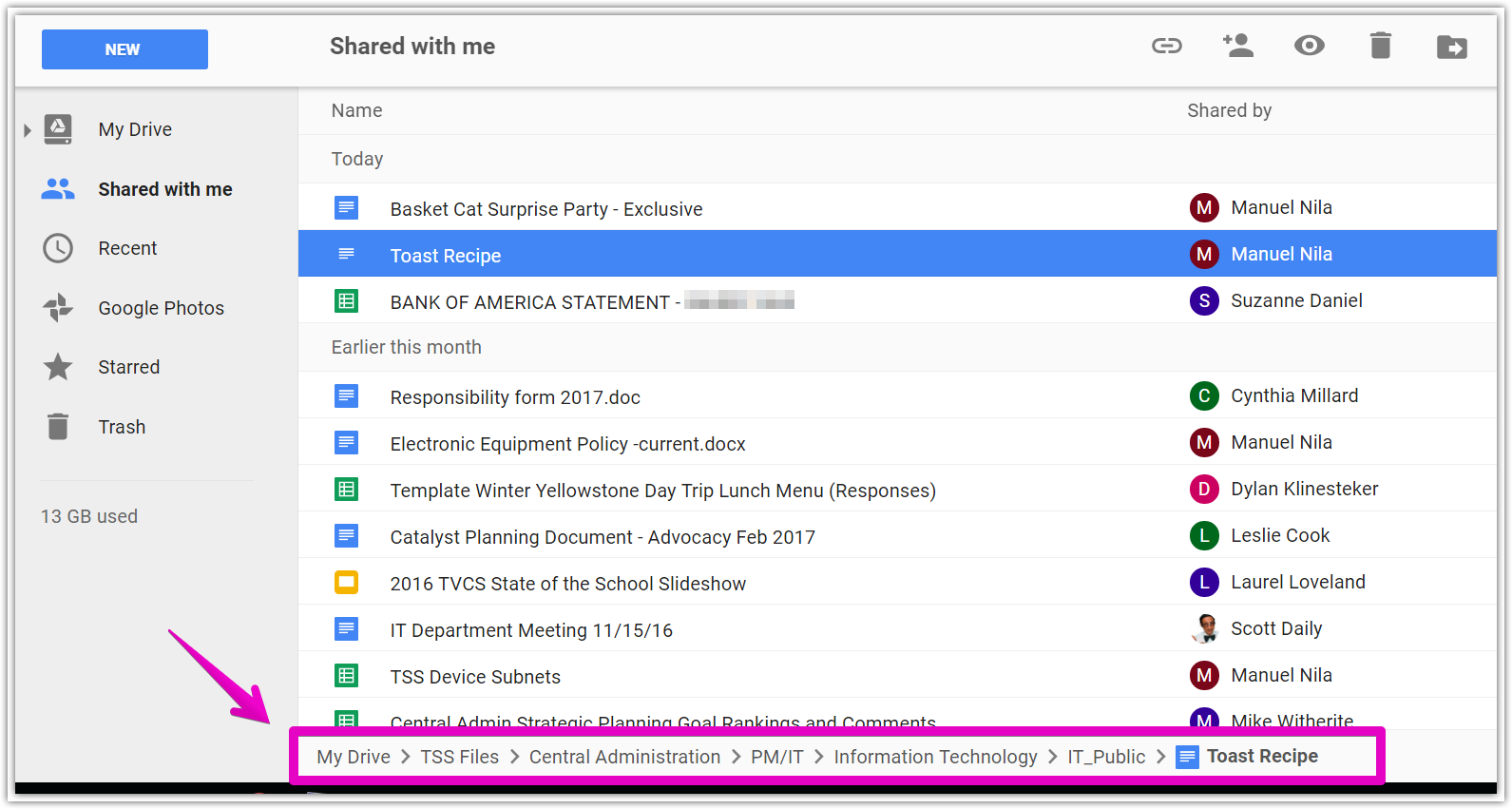 ...and the other is by revealing the right-hand Details Pane. If you don't already see this sidebar, you can reveal it by hitting the 'd' key on your keyboard, or by clicking on the small 'i' icon in the upper right hand corner of Drive. Either way, you'll get a clickable link to the document's location:

Using either of these two methods, you should be able to find the driving directions for any Google Drive file that's shared with you. That is, as long as the 'house' you're looking for is on a public street..

What About Files That Have an Unlisted Address?

Both of these two methods work really well, until you run into a file that's inside the Google Drive equivalent of a Secret Bunker. You'll be able to tell if you're dealing with one of these hidden files because the method shown above (highlighting the file in Google Drive, then looking at its location path) will show you something like this:

In this example, Mani's 'Basket Cat Surprise Party' (side note: it's gonna be #EPIC) is in a Google Drive location that's not visible to me. This could be because it's stored in Mani's 'My Drive' section of Google Drive, or maybe it's inside an area of TSS Files (say, the "HR" folder) that I don't have access to. To extend our real-world analogy a bit, it's as if Mani was inviting me to a party in his secret underground bunker. It's not on a public street and it doesn't have an address, so it's really hard to find. There are two solutions to this problem:

1. Ask the File's Owner to put it somewhere in TSS Files that you can access.

This is like asking Mani to move his secret bunker out of the woods and onto a public street where I can find it. Every department at TSS has a Public folder (like IT_Public or TVCS_Public) that's visible to all employees. If the document isn't secret or sensitive, these folders make great 'public addresses' for folders someone wants to share. Of course, maybe the owner wants to restrict access. Basket Cat's Surprise Party is supposed to be a secret. Mani doesn't want his secret bunker on a public street, otherwise it's not a secret bunker. This leaves another option: dig your own entrance to the secret bunker by....

You'll instantly get a small dialog box that let's you know you've succeeded and gives you a chance to Organize the file:

So what just happened? In our real-world analogy, rather than asking Mani to move his secret bunker, I just blasted a tunnel directly from my house to the bunker. If I go to drive.google.com and look at 'My Drive', I'll see my entrance to the bunker (the Surprise Party file) sitting there waiting for me.

I can move this file around, organize it, or put it anywhere I like. Remember how the Bruce Wayne's secret entrance to the Bat Cave was in his living room? I can put my secret entrance in my Active Projects folder, or maybe in my Archive folder. It won't matter to Mani; he's got his own entrance that he uses, so he doesn't need to use mine.

If you think this Bat Cave/secret bunker analogy is convoluted and juvenile,

a) You're right, and

b) It's still the most useful way to illustrate how this quirk of Google Drive works.